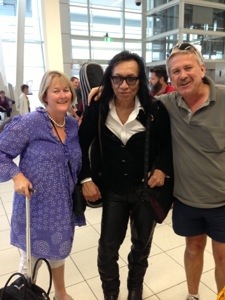 “Thanks for your time and you can thank me for mine .. and then after that’s said …. Forget it” –  Opening line from Rodriguez song ‘Forget it’ from his Cold Facts Album.

Following my last blog on Rodriguez you won’t believe what happened at Adelaide Airport last week.  I returned from NZ on Saturday and Bill was there to collect me. We headed down to get our bags and who should we meet at the baggage collection … Rodriguez!!

Being a shy person by nature I looked on as Bill introduced himself and had a discussion about his music and the influence it had on him. He told him he had been playing his favourite songs (Establishment Blues, Sugar Man, I Wonder and Rich Folks Hoax) on the guitar from the Cold Facts album just before he left to pick me up. He thanked him for his great music and the enjoyment it had provided over the years.

He told Rodriguez we were travelling to the blues fest at Byron Bay specifically to see him the following week and the he was the reason for our attendance at the festival. For a popular muso, he still seemed genuinely delighted that strangers approached him to tell him he was appreciated. Bill introduced me to his new friend (!!!) and this intriguing musician made a point of remembering our names and said ” make it a date” at Byron.

Bill was on a high for the rest of the week, having met someone he had admired for years and who had impact on his life.

Motivational speaker, Mark McKeon had delivered a similar message to the group the evening before, suggesting the way to keep people in your business or organisation was to give three parts acknowledgement, one part challenge.

Great acknowledgements not only make the recipient feel good, it makes you feel good as well!

So I encourage you … Next time you see one of your personal heroes, mentors or someone you admired take the chance and recognise the impact they had on your life.

Hope you all have a great Easter
See you in the front row at the Rodriguez gig on Friday.

One of my mentors – my husband Bill

Wow! what a story. Last night, Bill and I watched “Sugar man” the story about songwriter Rodriguez who released two albums in US in the early 70’s which didn’t even make ripple on the US music front. The same albums created a cult following during the depth of apartheid in South Africa selling over 500 000 copies.

Australia was the only other country in the world showing interest in the man they said was better than Bob Dylan.

The amazing thing was he didn’t know. He was still unknown in America and working his backside off as a labourer, struggling to raising his family and living in  26 different homes during this time.  While royalties were paid to his record company, not a cent was passed on so he didn’t have a clue about the impact he was having in South Africa at the time. (and on husband Bill and a few of his mates!)

Over 25 years later he was tracked down by a South African fan, who believed him to be dead, and he discovered the impact of his music in that country. Visiting South Africa in 1998 he performed to 6 sold out concerts … and then returned to being a labourer in US.

If only someone had contacted him!

His story blew me away… and took me back to my heroes and mentors. It made me think about  many of the people who had influenced my life  that I hadn’t taken the time to actually acknowledge for the impact they had on me.

In a country like Australia where we “knock the tall poppy” and berate success, we are not good at acknowledging. Imagine how powerful it could be if we had the courage to tell people genuinely what they had done and the impact they really had on our lives.

And I don’t mean a “thanks mate” or a “you did a great job”. I mean an acknowledgement with some “punch” behind it.

In our coaching and mentoring workshops we talk about acknowledgement as being authentic – from the heart. It focuses on the “who”  – the qualities demonstrated – what it really meant for you.

One of my mentors was my mother in law – a wonderful woman who demonstrated to me the importance of pursuing your passion in your career (amongst many other things). Sadly we lost her to cancer in 2000 and I never had the opportunity to tell her of the impact she had in my life.

We can’t all have the impact of Rodriguez – such an impact on a country – but we can acknowledge the people who have an impact on us.

I leave you with the challenge to acknowledge your heroes and informal mentors … and I look forward to hearing the impacts!

PS – I also recommend watching the Rodriguez documentary – Sugar Man. An amazing story. (Bill and I are looking forward to seeing a 70 year old Rodriguez perform during Easter at the Byron Bay Blues Festival.)

If you would like to follow my blog by email enter your email address in the space at the top right of this page. You will receive an email from wordpress and you must confirm to be added to the email list.